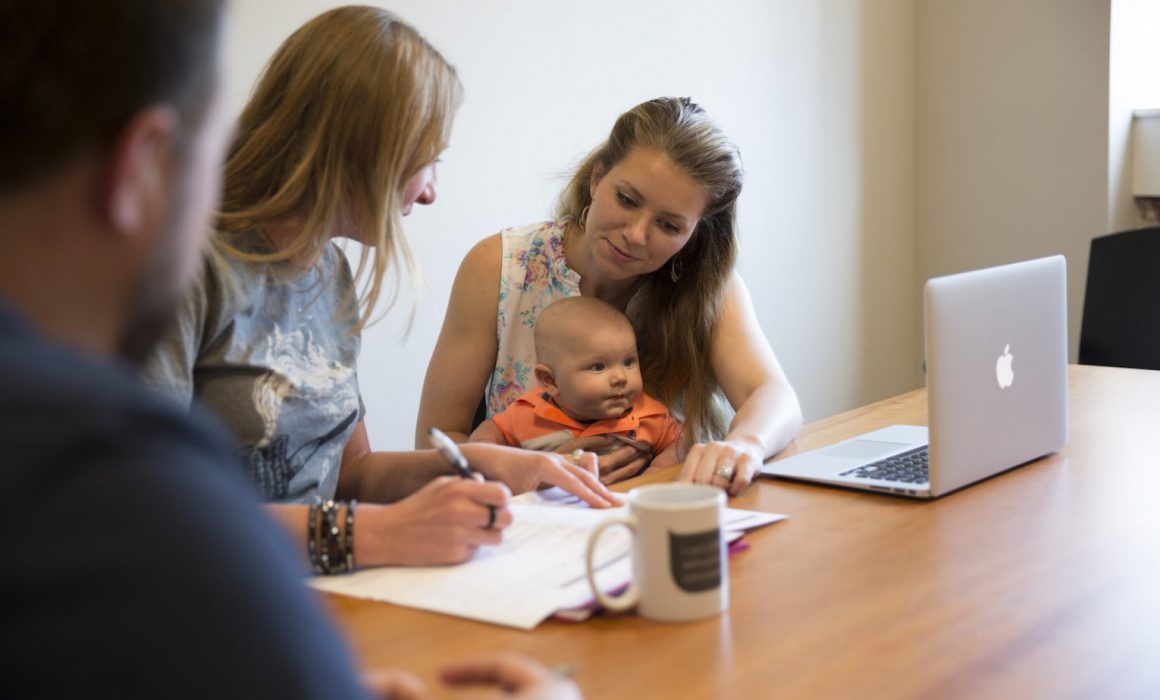 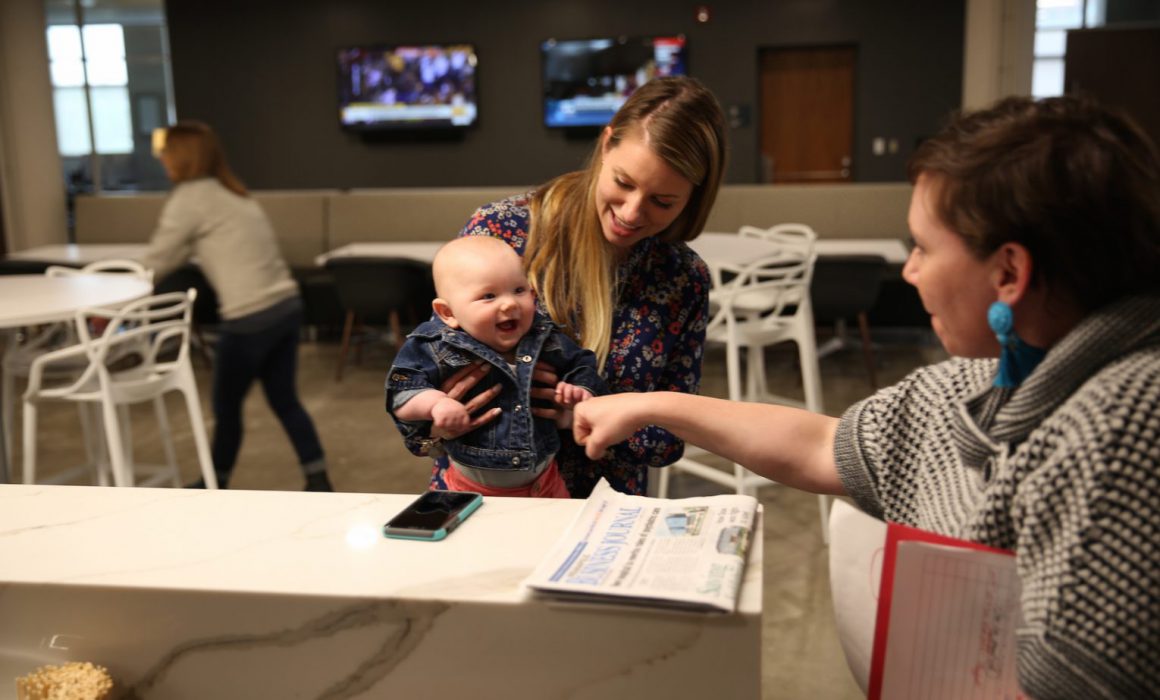 When Whitney Pflanzer returned to Borshoff after maternity leave she had to learn how to balance motherhood and her career. Literally.

On her first day back the Senior Account Executive strode through the door with a stroller in front of her; a laptop bag on one shoulder, a diaper bag on the other.

The occupant of that stroller, a blue-eyed baby boy named Roman, ate, slept, played, cried, smiled at people and attended meetings at 333 N. Alabama with his mom four days a week for almost four months as part of Borshoff’s Bring Your Baby to Work program.

A 2014 poll of nonworking adults aged 25 to 54 in the United States showed that 61 percent of women said family responsibilities were the reason they weren’t working.

As a mom herself, former managing principal Susan Matthews started Bring Your Baby To Work knowing that putting a newborn in daycare can cause immense guilt and pull new parents away from their careers. She also knew that without flexible options, many women saw opting-out of the workforce and “leaning in” to their careers as their only options. That didn’t have to be the case, not at a women-owned business known for creative and strategic thinking.

To participate, parents work an adjusted schedule while bringing their babies to work. Babies are eligible from six weeks until they turn six months. During that time, some choose a shorter work week, some bring their baby every day. We’ve learned a lot over 17 years, but there’s no “right way” to ease back in as a new parent.

“It speaks to our openness and creativity,” Matthews said. “And it’s helped us attract and keep great employees.”

Since 2000, 13 women have brought 18 babies (including Roman) to work at the end of their maternity leave. One hundred percent of participating moms stayed with Borshoff for at least one year after bringing their babies to work. On average, moms stayed with Borshoff for seven years after their last baby “graduated” from Bring Your Baby To Work. Six participating moms are still at Borshoff. But the program isn’t limited to moms. Dads can take advantage, too, but none have yet.

Bring Your Baby To Work

In 2000, Borshoff principal Jennifer Berry was the first employee to bring her baby to work. Then a designer, she credits the program as a primary reason she stayed with Borshoff and describes it as one of the opportunities for which she’s been most grateful in her life.

“I didn’t have to choose between my family and my career, and I had a big network of supportive parents helping me navigate being a mom,” Berry said. “As the first parent to try it, I was very nervous. Not only was I experiencing the pressures of being a new mom, but I also felt the weight of making this work so others would someday be able to take advantage of the wonderful opportunity.”

The empathy and support that’s extended from coworkers and fellow parents is a benefit that might not have been considered when the program first started, but it’s one of the highlights.

On Whitney’s first day, two coworkers whose kids had been through the program came into her office, closed the door and told her, “Don’t feel like you have to be supermom. We’ve been there,” she said.

When former Senior Art Director Lindsay Hadley (who just gave this powerful plea to Ivanka Trump on behalf of working moms) reflects on the time when curly-haired Milo was in the office, she says she was less productive not because of the baby, but because of all of his visitors.

At Borshoff, when a coworker is expecting, the first question is whether or not she’ll bring the baby to work. While the program works for most, it’s not for everyone.

Former Account Director Emily Kibling was all for bringing her daughter Audrey to work. She tried it out for a few days and realized she needed to keep the two worlds separate. Instead, she was able to stay home for two days out of the workweek.

“For how many times I changed my mind, the owners were always flexible and made it clear they supported what worked best for me,” she said.

Account Supervisor Leanna Adeola recently returned from maternity leave and chose not to take advantage of the program.

“For me, the beauty of bringing your baby to work is that the option is available and each parent can decide what’s best for their family.” Adeola said. “If I decide I want to bring my baby occasionally, the door is open.”

While it has been tried and tested in many ways, similar results generally unfold. Through the help of supportive of coworkers, new parents learn that the demands of a career and a family are a balancing act.

“It’s fun to sit back and watch how people navigate these decisions, because we are all different.” Berry said.

While it might never catch on in a broad way, at Borshoff, bringing your baby to work makes sense. It empowers employees to confidently make personal and professional decisions. It also creates a bond between coworkers that can’t be found anywhere else.

Hear from Borshoff mom’s and babies:

Want to talk more about Borshoff’s culture and capabilities? Drop us a line!